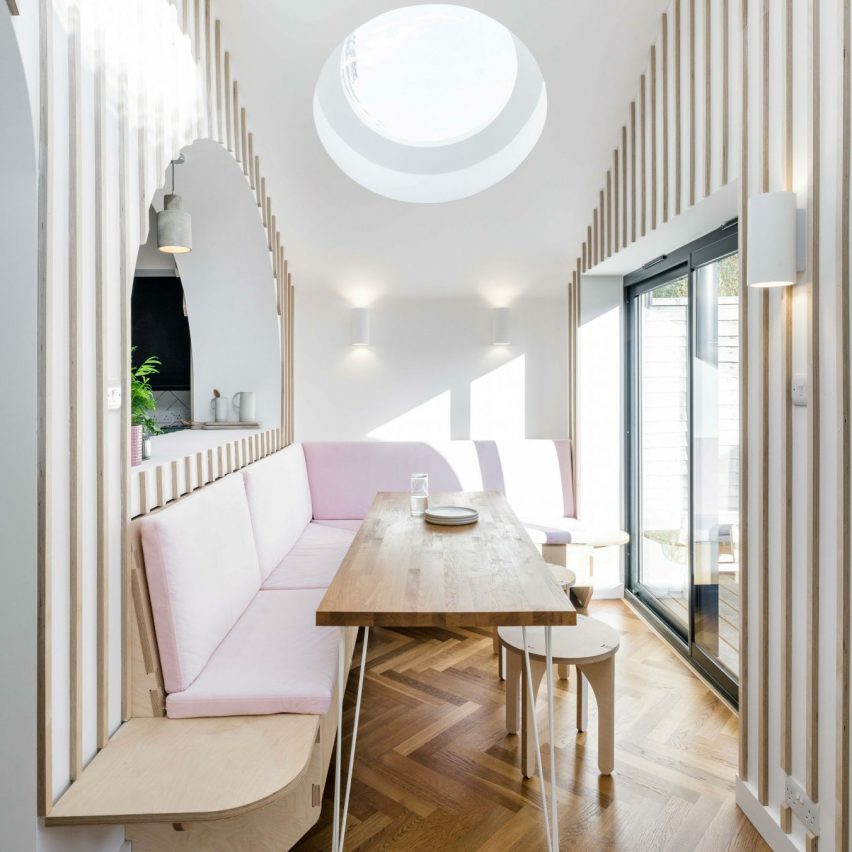 Ahead of announcing the Dezeen Awards 2019 winners next week, we reveal the projects and studios our readers think should win.

We asked people to vote on Pinterest for their favourite architecture, interiors and design projects and studios from this year’s longlists.

The top 20 projects chosen include a community centre in Fiji, a mesh-covered events space in a Taiwanese forest, graphics for a food hall and a twisting temple at Burning Man festival.

This year’s most popular project, receiving the most likes on Pinterest, is the interior of a London house designed by Brighton-based FAB Architects. The project features a porthole window, pink velvet seating and arched openings.

Estudio MMX was voted studio of the year by readers. The Mexican architecture studio has also been shortlisted in the emerging architect of the year category by this year’s judges.

Architecture projects in the top 20 include a Spanish housing project by Muñoz Miranda Architects, a nine-storey office building in Iran and a house in Hokkaido, Japan by SAAD.

Mamou-Mani, whose founder will be speaking about post-plastic materials at Dezeen Day on 30 October, was voted one of the best studios of the year. The London-based architecture studio was selected alongside Studio Mutt, Geoffrey von Oeyen and Basalt Architects.

Interior design studios of the year chosen by our readers are Bergman & Mar and Australian practice Alexander & Co, which were both longlisted in the emerging interior designer category.

Appearing twice on the list of top 20 projects is Jungle Keva, a Mexican hotel designed by Jaquestudio, which was longlisted in both the hospitality building and hotel and short stay interior categories.

The project was also shortlisted by our 75 judges in the interior design category.

A three-legged stool by Studio Adjective, a pair of shoes designed for the Taiwanese market, a watch made from concrete and a modular wood burner were all popular design projects on Pinterest.

The Dezeen Awards 2019 master jury met in London last month to decide this year’s winners, which will be announced online next week.

The post Dezeen readers choose their favourite projects and studios of the year appeared first on Dezeen.