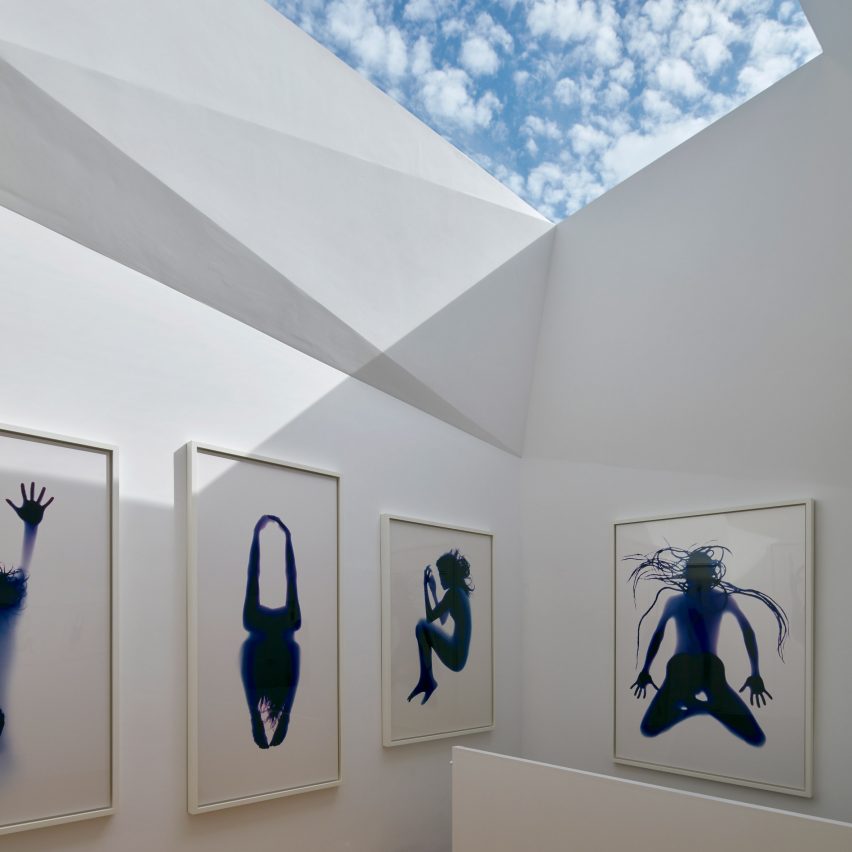 Architecture studio Jonathan Tuckey Design has turned a mews house in Paddington, London, into an art gallery for its former residents topped by a large roof light.

Named the Paddington Pantheon, the artists’ former home was reconfigured to be a gallery to display their work alongside a small guest apartment.

“Having lived and worked previously in the house, the clients perceived the space as the ideal setting for the display of their artwork,” explained Jonathan Tuckey Design founder Jonathan Tuckey.

“Conceived, defined and developed within its walls, their artworks were a product of those domestically-scaled spaces and in a beautiful way inherently suited the scale of the mews house,” he told Dezeen.

The studio converted the rear part of the small mews house in Paddington into the main gallery space.

To allow light into the gallery, which is spread over two floors connected by an open staircase, Jonathan Tuckey Design designed a large roof light that is built into an angled aperture that extends up from the gallery.

“The mews house sits in a dense community of buildings, many of the immediate neighbouring buildings being taller than their own,” said Tuckey.

“Pitching towards the sky, the oculus that crowns the gallery was sculpted in a way that obscured the views towards the other buildings, to manifest a feeling of being isolated and away from London thoroughfares.”

The Paddington Pantheon gallery, which was designed in collaboration with the artists to be “thought of as an art piece”, was informed by Roman architecture.

“A programmatic basis for the design came from the Pinacotheca, the area of the Greco-Roman home that acted as a picture gallery,” explained Tuckey.

“The Pantheon, from which the project borrows its name, is formally significant due to the oculus that crowns its domed roof,” he continued.

“The penetration of light through a celestial aperture is mimicked and nodding to the work of James Turrell, this was placed above the gallery space in a prismatic roof, contorted away from the orientation of the plan towards the north-south passage of the sun.”

As well as the ancient precedents, the form of the roof light was also informed by the small property, which was built on a lane to service a large house on one of Paddington’s main streets.

“Historically, mews houses were devoid of windows to their rear. Servicing the great houses behind, they were restricted of views and as a result were poorly daylit,” said Tuckey.

“Small amounts of light filtered down from roof lights and cowls, whose formal language was adapted into the sculpted oculus of the gallery.”

Alongside the main gallery space, a seating area next to a small kitchen and bathroom occupies the front of the house on the ground floor.

Above on the first floor, a bedroom and bathroom have been built so that the artists can use the gallery as a guest house.

Many of the small properties on London’s mews street have been converted into shops and homes. Jonathan Tuckey Design previously created a live-work space for the owner of a fashion boutique in a mews house in Knightsbridge, London, which was one of 10 mews houses we recently rounded up in the city.

Photography is by James Brittain.