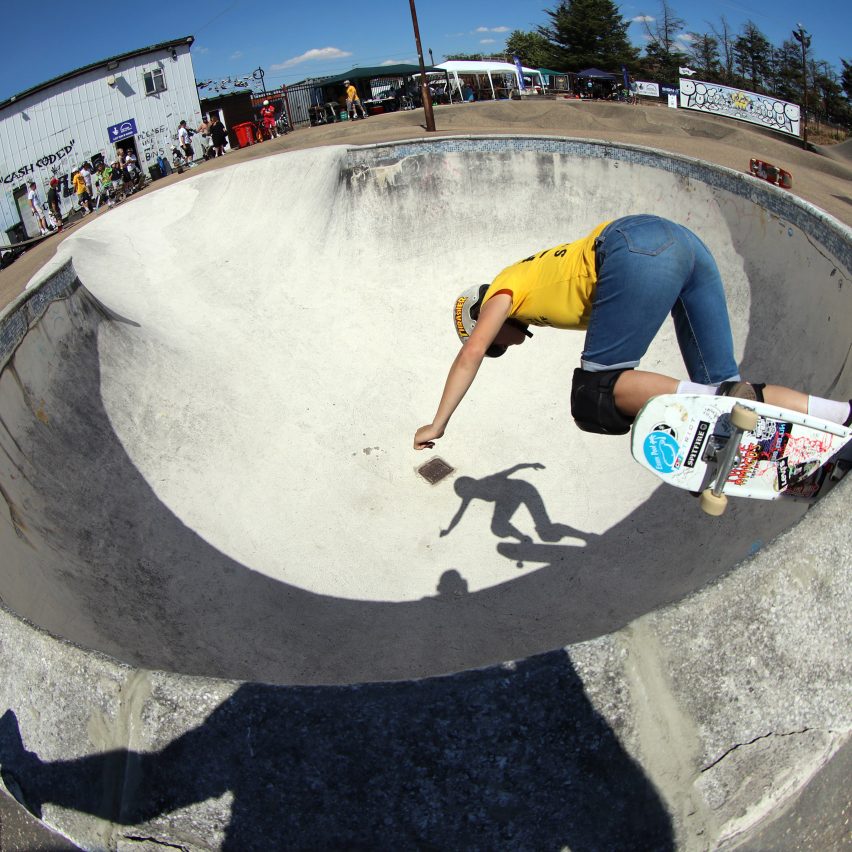 Over the past 70 years skateboarding has gone from fringe to mainstream. Iain Borden, author of Skateboarding and the City, selects 11 skateparks that highlight the key aspects of the movement’s culture.

“Skateboarding provides a different way of experiencing our buildings and spaces, suggesting that they can be a pleasure ground of play, energy and delight,” Borden, author of Skateboarding and the City: A Complete History and professor of architecture & urban culture at the Bartlett, University College London told Dezeen.

From its beginnings in 1960s California, skateboarding has grown to become an activity enjoyed in cities across the world. Skateparks are being built at a rapid rate and the sport is set to appear at the Olympics Games for the first time in 2020.

“Skateparks are more than a type of sports facility”

“This pattern is being repeated in just about every country worldwide, with more municipal authorities and community groups realising that skateparks are far more than just another type of sports facility, but a way to connect with and stimulate a much wider and richer urban life,” he continued.

To mark the release of his book Borden has selected skateparks from around the world that show the history and variety of the sport.

“These 11 skateparks show the sheer diversity of contemporary skateboarding – open to connections with heritage, health, community, an independent DIY spirit, art, commerce and innovative design. Skateboarding is increasingly plural, and so are the terrains on which it operates,” explained Borden.

Read on for Borden’s pick of the skateparks that define skateboarding culture:

A slew of commercial, concrete skateparks were built in the 1970s, but few survived beyond the 1980s. A rare survivor from 1978 is Rom in Hornchurch, UK. It’s a gritty and authentic skatepark experience.

Replete with its original pool, moguls, snake run, half-pipe and other delights, it was Grade II listed in 2014.

Based on the original Combi-Pool at California’s infamous 1970s Pipeline skatepark, the Vans version (built in 1999 and modified in 2000) offers almighty square and round pools conjoined by a prominent hip.

Home to an annual Vans invitational contest, the Combi rolls history, demanding terrain and cutting-edge riding into one. A new version is currently under construction at Vans’ Huntington Beach skatepark.

Don’t want a commercial or sanitized skatepark? Prefer something tougher, less predictable and home-grown? Solution: build it yourself on a stretch of appropriated waste ground.

Following the example set by Burnside in Oregon, hundreds of these DIY skateparks have sprung up worldwide. One of the best is FDR in Philadelphia, where since 1996 rebellious skaters have collaborated on a piratical paradise of rideable surfaces.

Where 1970s skateparks focused on spectacular single-feature pools or bowls, more recent facilities emphasize the rider’s flow across a moon-like landscape of shapes, undulations and lines.

Built in 2005, the 3,000 square metre Stapelbäddsparken in Malmö, epitomises the creed, and was created by the local skateboarding-based Bryggeriet school and Placed To Ride largely without any predetermined plans or designs.

Ever since the X Games launched in the mid 1990s, extreme terrains and extreme riding have helped render skate culture dramatically visible and digestible for the video-streaming generation.

And if you are a successful X Games pro like Bob Burnquist, what better than to build your own $300,000 MegaRamp – a massive combo of launch ramp, jump and quarter pipe – training facility in California, aptly named Dreamland?

Build it big enough to satisfy inter-state and international visitors is the thinking behind the North Houston skatepark at Greenspoint, Texas, built in 2014.

Skateparks like The Berrics consequently offer scenographic street-courses, where stairs, rails, ledges, planners, step and other features of everyday city urbanism are all perfectly simulated. Opened in 2007, The Berrics itself is a private facility, but just about every new skatepark today includes a similar arrangement.

Major international brands are consequently keen to make associations with skateboarding, as typified by the bowl at Selfridges flagship department store built in 2018. Fashion, consumerism and skateboarding come together in perfect harmony.

The 1,200-square-metre Pura Pura itself was freeform-constructed in 2014 by a collaboration of over one hundred skaters from seventeen countries, giving local at-risk youth a new outlet for their energies and creativity.

Sophisticated architectural design is an important aspect of many contemporary skateparks, as at the Skatehall, Oslo, completed in 2017.

This 2,900-square-metre indoor-outdoor facility by Dark Arkitekter, Glifberg-Lykke and IOU Ramps contrasts exposed sculptural framework for the raised bowl with a geometrical articulation of the hyper-modern building surfaces and volume.

Skateparks have come a long way from the simple concrete shapes of the 1970s, with many now carefully weaving their rideable surfaces into the existing landscape.

Skatepark Péitruss in Luxembourg, exemplifies this approach. In 2016 designers Constructo deployed hexagonal shapes, coloured concrete and subtle changes of level to contextualise this skatepark with the geometrical design of the adjacent Vauban fortress, a UNESCO World Heritage Site.

The post 11 skateparks that tell the story of skateboarding culture appeared first on Dezeen.