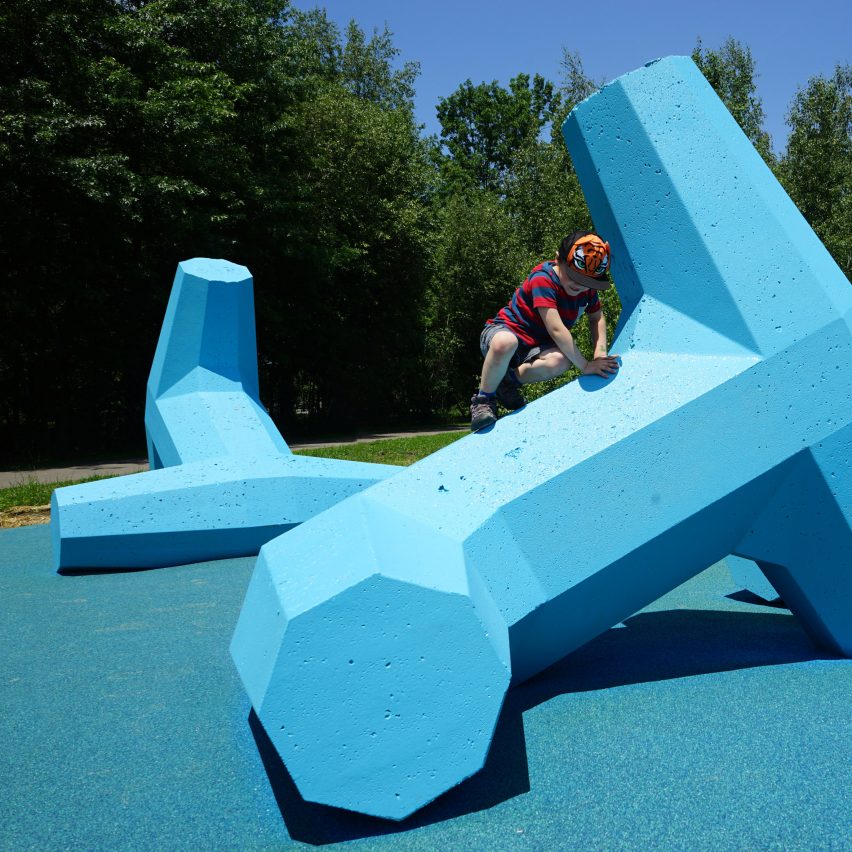 Canadian designers Julia Jamrozik and Coryn Kempster have made Breakwater, a concrete sky-blue playground in Jamestown, New York out of repurposed wave breakers.

Breakwater is made from dolosse, heavy prefabricated concrete blocks normally used to prevent coastal erosion, that have been repurposed as a climbing frame.

Formed of complex geometric shapes, piles of dolosse are positioned along coastlines to form breakwaters – barriers that protect the land against the impact of waves.

“We love the strange beauty of a dolos’ four-pronged form,” Jamrozik and Kempster told Dezeen.

“Dolosse are so sculptural and take on a different appearance depending which end rests down and how they’re rotated,” they added. “They look so particular and specific, yet entirely cryptic if you don’t happen to know what they are and what their intended function is.”

Jamrozik and Kempster salvaged four dolosse that were originally intended for use on Lake Erie in America.

The design duo re-situated the concrete blocks in an urban context, arranging them into a playable sculpture and coating them in sky-blue polyurea, a spray-on non-slip waterproof coating.

The designers were particularly drawn to how large dolosse are.

“Most of the built environment, when it comes to things we’re meant to touch and play with, is scaled to our bodies,” they said.

“Normally that’s a good thing of course, but it also makes the scalar jump with these huge precast elements fun, like playing on giants.”

The arrangement of dolosse that make up Breakwater sits on a poured-in-place rubber surface that is coloured the same sky-blue. This surface protects children from falls, and also emphasises the structure’s colourful theme.

Visually, Breakwater’s arrangement takes cues from maritime imagery and minimalist artwork, said the designers, making it both a practical playground and a sculpture that is open to the public at all times.

“We use the language of play to create social infrastructures: physical prompts which encourage contact between strangers,” explained Jamrozik and Kempster.

“We believe that questioning the way people use and occupy space and their relationship to one another through playful encounters has enormous potential to speak across generations and cultural differences.”

Intentionally ambiguous, both those who interact with Breakwater and also passersby are invited to interpret the structure in their own way.

“Compositionally, we discovered by working through iterations using 3D printed scale models that we wanted a combination of dolosse in groups, with some off on their own,” explained the designers.

The playground is installed in Jamestown’s Chadakoin Park, along the Riverwalk bike path. This location was chosen because it is next to one of the city’s underserved neighbourhoods.

This means that Breakwater is accessible to children from low-income families. Its position along a bike path also connects the playground to other parts of town.

Elsewhere, American studio Atelier Scale has designed The Folds, a small community playground in China built to encourage tactile play. Rimbin is a Berlin-based “infection-free” playground resembling a cluster of water-lily pads, designed for children during the coronavirus pandemic.

Coryn Kempster and Julia Jamrozik have worked together on design projects since 2003. Recently, the pair unveiled a sky-blue cafe in Buffalo, New York.

The post Breakwater in Jamestown is both a public playground and a sculpture appeared first on Dezeen.