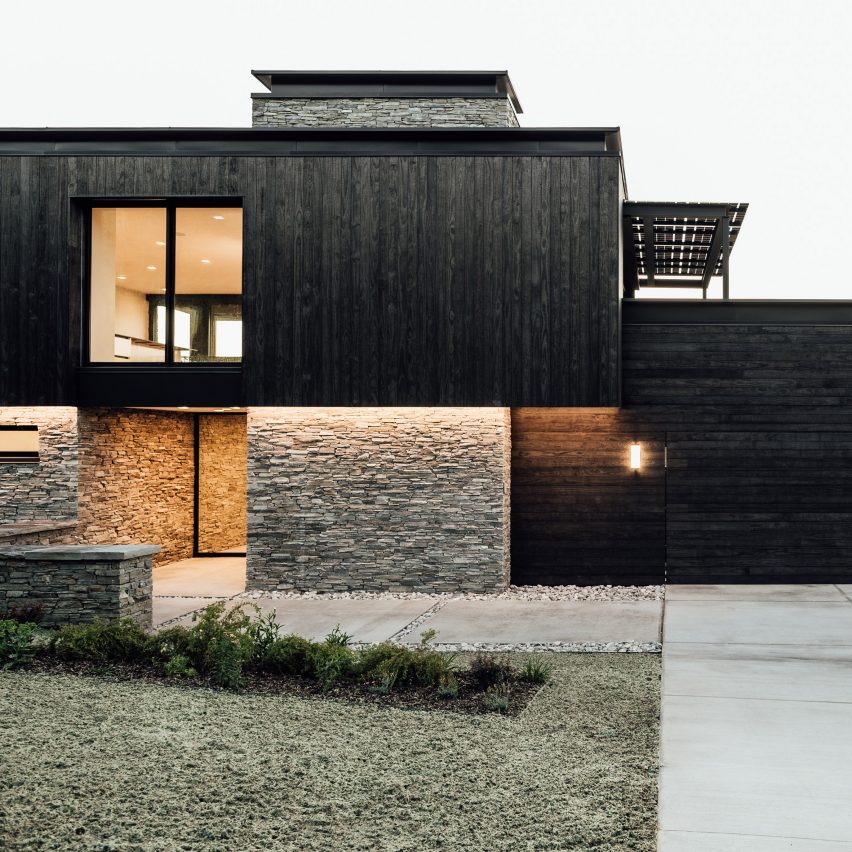 Blackened timber and quartzite wrap the exterior of this multi-story dwelling by US firm Klima Architecture, which was designed for a family relocating from California to a Utah ski town.

The Meadows Haus is located in Park City, which is situated along the eastern front of the Wasatch Mountains.

The project was designed as a primary residence for a family who formerly lived in Silicon Valley. Local studio Klima Architecture aspired to create an energy-efficient dwelling that embraced its context.

“Our clients wanted a home that was inherently energy-efficient, and took advantage both of the southern sun and views of the ski resorts over neighbouring houses while setting nicely into an older Park City neighbourhood,” said firm founder Chris Price.

Exterior walls are clad in wood that was burnt using Shou Sugi Ban, an ancient Japanese technique. The charring “improves the longevity of the wood, and inherently has a distinct aesthetic that we liked” said Price.

Light grey-coloured stone was also used on the facades, serving as a contrast to the blackened wood. Pieces of thick-set quartzite are arranged horizontally without grout, resulting in a highly textured appearance.

Inside, the home features an atypical floor plan. The public zone, which is generally found on the main floor, was placed on the very top level, where the views are most expansive.

The ground level holds the master bedroom, a guest suite, a mudroom and a garage. The bottom level, which is partly below ground, encompasses two bedrooms and a family game area.

Interior design was overseen by Julie Chahine, who is based in Park City. Rooms feature soft textures, neutral colours and ample natural light.

Pale-toned oak was used for flooring and cabinetry. In many areas, the team paired white finishes with black accents.

A wall bordering the staircase is made of dark-stained accoya – a type of wood that is formed by soaking pine in a vinegar-like substance to increase its durability.

“We wanted to feature the stair wall, as it acts not only as a unifier of the entire house, but also as a light and heat well,” said Price.

The project was designed to meet rigorous energy-use standards set by the Passive House Institute (PIH).

Meadow Haus’s air-tight envelope consists of a double-stud exterior wall that is 14 inches (36 centimetres) thick and a roof frame covered with extra insulation. Under the concrete floor slab, there is a six-foot (1.8-metre) layer of insulation.

Other elements that help reduce energy consumption include triple-pane windows, a heat recovery ventilator that brings in fresh air, and a 10,700-kilowatt photovoltaic array.

Price said the house has not only been certified by the US division of the PHI, but also was given a “Best House” distinction in the “professionals under 35” category.

Once a mining area, Park City is now a popular destination for skiers and nature lovers. It also hosts the renowned Sundance Film Festival.

Other projects in the mountain town include Price’s own home – a black building that staggers down a wooded hillside – and a timber-clad residence by Imbue Design that offers sweeping views of the landscape.

In 2012, Bjarke Ingels Group won a competition to renovate and extend the city’s Kimball Art Center, but their scheme was ultimately rejected by city planners.