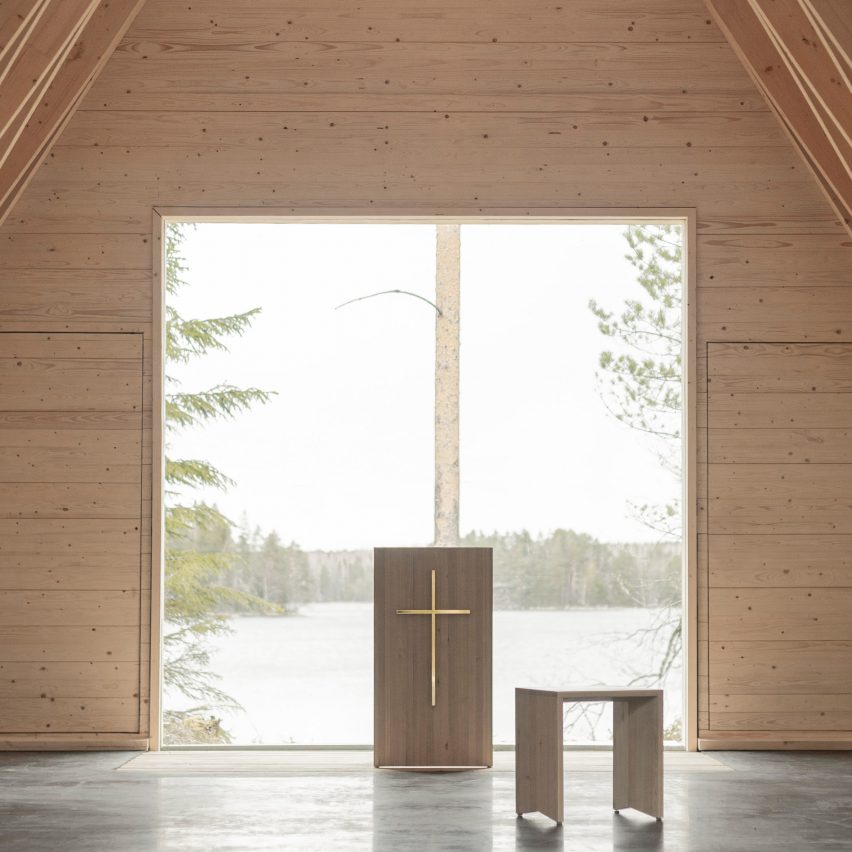 Architecture studio NOAN has designed a chapel within a forest overlooking a lake at the Tervajärvi campground in southern Finland.

Set in a forested area by the Tervajärvi lake near the city of Tampere, the chapel was designed to function as a camp church and as a small venue for weddings and christenings.

NOAN designed the small timber chapel to focus on the view of the adjacent lake, which is framed by a large window.

“The core concept was for a simplified multifunctional space with an opening that frames the unique view to the lake,” said NOAN founding partner Lassi Viitanen.

“The view works as an altarpiece for the chapel. The sliding doors opening mirrors the shape of the altar opening and makes the space flow through and connect the interior with the surroundings,” he told Dezeen. “The direction of the spatial flow is emphasized by the rooftop ridge opening.”

The structure of the chapel is formed from a series of curved glue-laminated timber (glulam) beams made from Finnish spruce.

Visible inside the chapel, the structural beams form a pattern that recalls the pointed arched forms that often run alongside the nave of gothic churches.

“The curved glulam beams and interior as a whole had two visual priorities: first it should be visually influential, emphasizing joy and communality, yet also afford consolation,” explained Viitanen.

“Second it should have a symbolic connection to the context; surrounding forest and lake and to the building’s ecclesiastical purpose,” he continued.

“These subjective interpretations could be for example the form of fish – a lutheric symbol, the form of the boat – the lake context or just a soft curve connecting the interior to the surrounding nature or waves of the lake.”

NOAN aimed to create a multifunctional space that could adapt to the future needs of the campground.

No fixed furniture was built, with local carpenter Puusepänliike Hannes Oy instead creating simple larch stools and a small lectern for the chapel.

“Instead of fixed benches chapel stools are moveable and the interior space is flexible and adapts to the changing needs of the future,” said Viitanen.

“Instead of trying to prophesy what the church in Finland is going to be after 50 years, we should design and build flexible and multifunctional spaces.”

The glulam structure was clad in grooved planks of Siberian larch, which were coated in tar that has been tinted with charcoal to create the blackened exterior finish.

The chapel is uninsulated as it will be largely be used in the summer months.

According to NOAN, the project was largely built by volunteers as this was the only way to realise the chapel with the budget.

“Once the budget was calculated and the chapel was over the originally planned max budget, parish community volunteers stood up and said that ‘we are going to build it by ourselves’,” said Viitanen.

“The chapel was almost entirely assembled by volunteers. Professionals were entrusted with the more demanding individual phases, with all the glulam parts, for example, coming prefabricated from a factory,” he continued.

“It did not go over the budget.”

Photography is by Essi Nisonen.

Other recent projects to use wood for places of worship include Nicolas Pople Architects’ vaulted CLT church in Stroud and the Oikumene wooden church, built for workers on a rubber plantation in Indonesia.