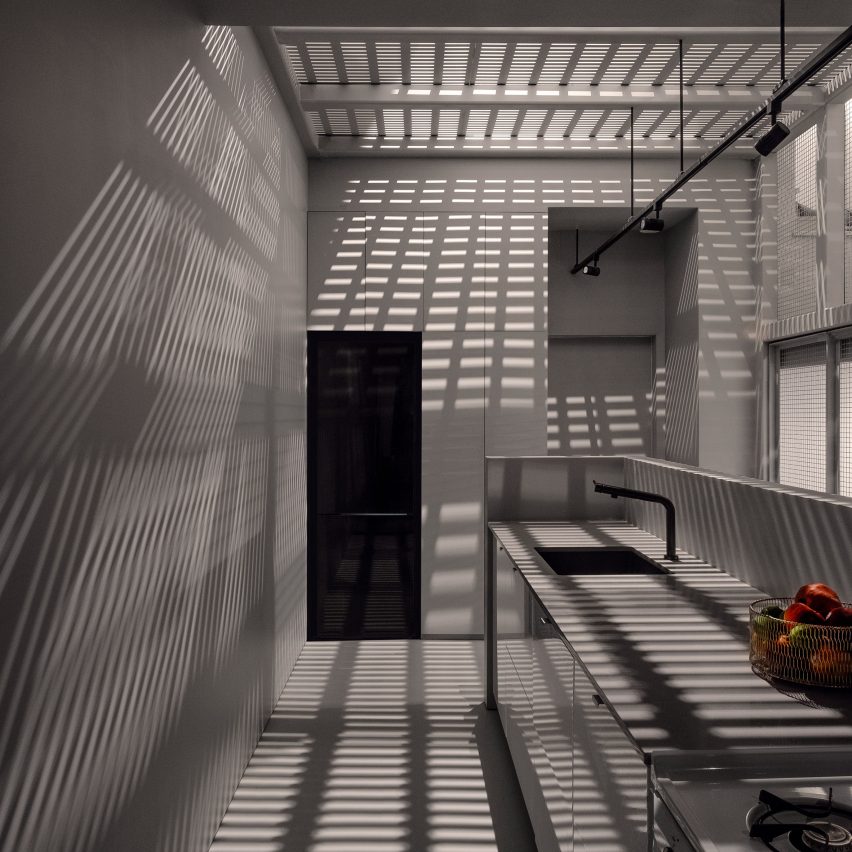 Canadian studio Jean Verville Architecte has created a theatrical interior inside a Montreal house by adding a large steel structure capped by a skylight that casts dramatic shadows.

For the project, called MSO; Play/Pause, the studio completely reorganised the interior of the building and built a 12-metre-high steel lightwell in the centre of the three-storey house.

The house belongs to a pair of actors, Sophie Cadieux and Mani Soleymanlou, so Jean Verville Architecte designed them a  home that could double as a performance venue.

“We subtracted floor sections from the heart of the house to insert the steel structural installation, ” studio founder Jean Verville told Dezeen.

“The rooms on the outskirts have been kept but redistributed to new versatile functions.”

The steel installation measures five by five metres. A skylight caps the structure, turning it into a lightwell that casts theatrical shadows in the rooms.

Its addition breaks up the shapes of the existing rooms, creating an interesting new layout for the owners as they go about their daily lives.

As the structure unfolds over the three floors of the four-bedroom house, it creates what the studio describes as “pauses,” with functional spaces at the bottom of the building followed by living spaces and then bedrooms.

“We start with the first two scenic pauses on the ground floor with the kitchen and the multifunction room,” Verville said.

“Then the six scenic pauses of the living spaces and artistic creation to then end with the two scenic pauses of sleeping breaks. Each space has been designed to be versatile and re-modelable with a new function, nothing is permanent!”

Metal grid screens and low walls were also added to the interior to create intriguing divisions between the spaces.

The studio chose a monochrome greige colour for the interior to underline the shadows and light patterns created by the steel structure, and to work as a background for potential future theatre events in the house.

“The great calm of monochrome greige and the changing and dancing light offer as much visual spectacle as inspiring spaces for theatrical rehearsal, and even soon the possibility of performance before a small audience,” Verville said.

To capture the final result of the renovation, the studio shot a photo series of the MSO; Play/Pause space with photographer Felix Michaud that features the owners in different staged situations inside their home.

Photography is by Studio Jean Verville Architects and Felix Michaud.