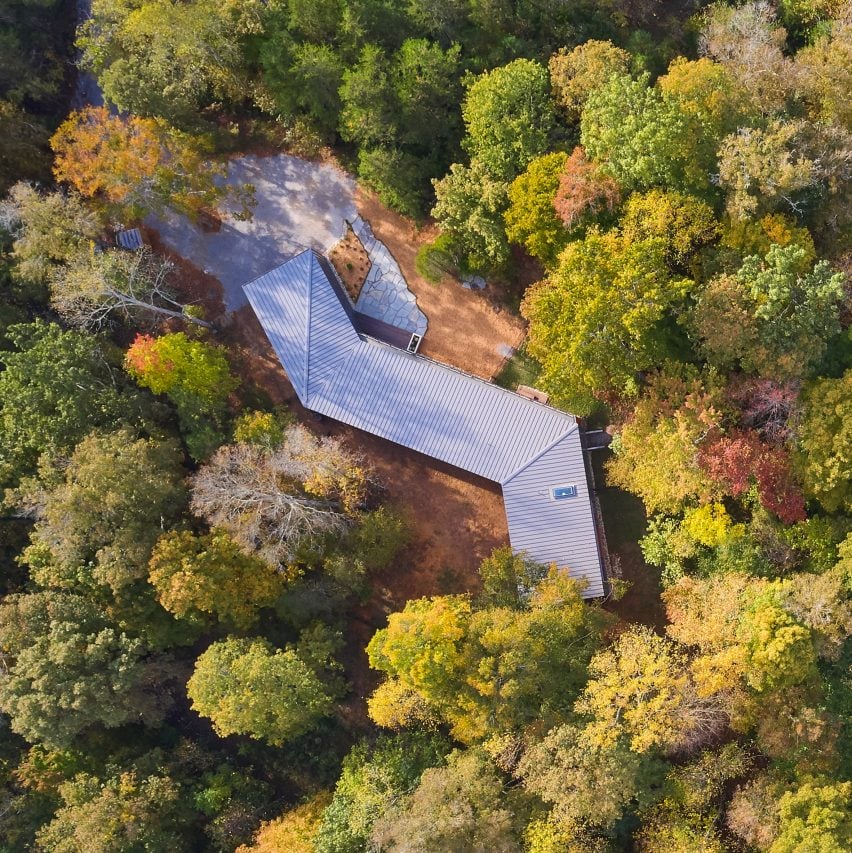 Three pavilions topped with a metal roof form this house in the woods of Tennessee, designed by American firm Sanders Pace Architecture.

French Broad House is situated in the community of Riverdale in central Tennessee, near the Great Smoky Mountains. The project’s name stems from its location in the French Broad River basin.

Built as a full-time residence, the dwelling was designed by Sanders Pace Architecture, which is based in the city of Knoxville.

The house consists of three, connected pavilions that zigzag through a grove of mature hardwood trees. The structures are slightly lifted above the ground.

A single, metal roof covers the three pavilions, along with the angular voids between them, which serve as porches. The roof is expressed as a thin plane that extends beyond a continuous fascia made of cypress.

The home is clad in cementitious panels that were carefully coursed so they align with adjacent windows.

French Broad House’s siding is painted in various shades of orange – a decision influenced by the fall foliage that the architects observed during an initial site visit.

Wooden accents on the facades further tie the home to its natural setting.

“Stained-cypress wood surfaces on the exterior add warmth and help to connect and unify the home with the surrounding forest,” the architects said.

Each pavilion has a distinct function. The central pavilion encompasses an open-plan kitchen, dining area and living room. One side volume holds a master suite and guest room, while the other contains a garage.

The entrance is marked by an extruded, flat-roof volume that forms a sheltered porch, while also providing a bit more space inside for kitchen components and built-in storage in the living and dining space.

The team opted for simple interior finishes, such as painted wood ceilings and white-washed oak floors. The material palette helps “reinforce the connection to the outdoors while adding a layer of refinement”.

Full-height windows enable the homeowners to feel immersed in the forest, while also ushering in soft daylight.

The porches offer an additional opportunity to relax and take in the scenery. Just off the public zone is a porch with a high, sloped ceiling. It was oriented to align with mountain views.

The other porch is accessed from the guest room and features a low, flat ceiling, helping it feel like a quiet refuge in the woods.

Located in the American heartland, Tennessee is known for its dense woods, rolling mountains and rich farmland. Other projects there include a rural home by Designshop that has brick and metal facades and a timber-framed dwelling on a farm that was designed by four university professors.

Photography is by Keith Isaacs Photo.