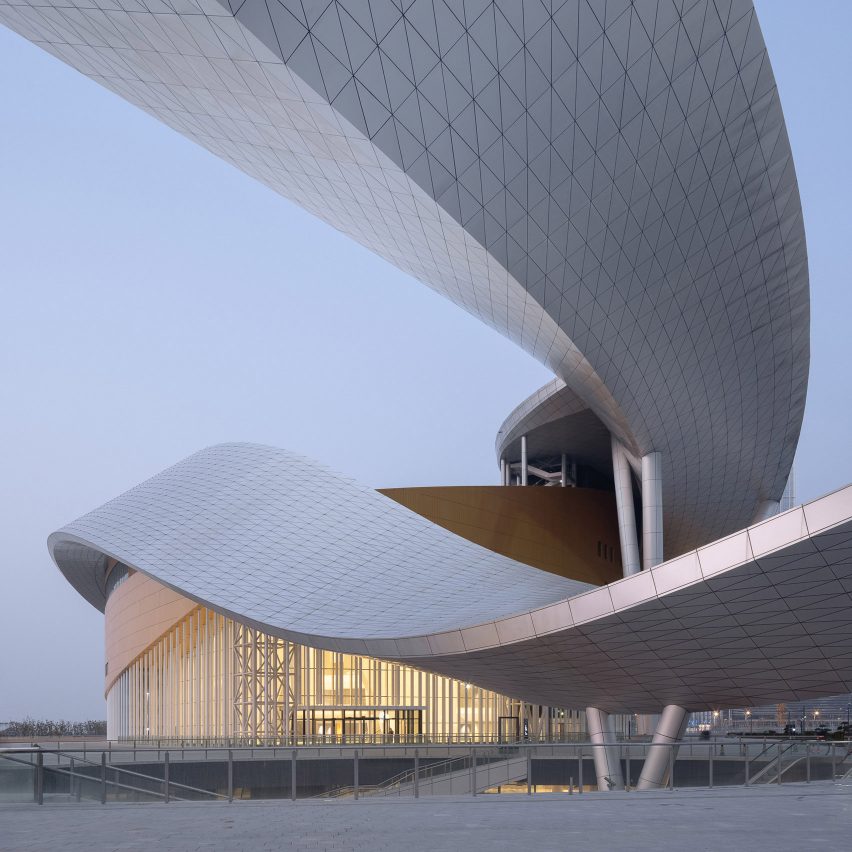 A ribbon of steel and aluminium winds around the Suzhou Bay Cultural Center, which French architect Christian de Portzamparc has completed on the shore of Lake Tai in China.

Set on an esplanade in Wujiang District in Suzhou, the centre is divided into two distinct wings that contain a mix of performance halls, educational spaces and galleries.

The wings are unified by a curved, 500-metre-long metal structure, which swoops up and around them in a figure of eight and distinguishes the building from afar.

Pritzker Architecture Prize-winning de Portzamparc divided the Suzhou Bay Cultural Center into two wings in response to its site, which is positioned at the point where an avenue through the district meets the waterfront.

“It was clear that the meeting of this pedestrian axis and the great lake would be an exceptional place, and it was on this site, on either side of the axis, that the cultural centre was to be implanted,” said de Portzamparc.

Where the metallic ribbon bridges over the pathway, it frames views of the lake and city from the avenue. At this point, de Portzamparc has also incorporated a 40-metre-high viewpoint for visitors.

“The cultural centre creates a new landscape by connecting water, sky and city in a play of iridescent reflections given by this metallic ribbon that spreads over 500 metres,” the architect added.

Inside, the north wing of the Suzhou Bay Cultural Center contains a large lobby, which leads into a 1,600-seat opera theatre.

This wing also includes a modular 600-seat hall for performances, a music conservatoire and cinema.

The southern wing contains two museums, one of which is dedicated to historic exhibits and the other to the city. Here there are also educational spaces, a youth centre and a conference centre for public events.

Suzhou Bay Cultural Center is complete with a range of cafes, restaurants and retail spaces. Many of the retail spaces are positioned at ground level where the avenue passes between the two wings, intended to draw in passersby.

The completion of the Suzhou Bay Cultural Center is the latest in a string of large-scale, cultural buildings built across China in recent years.

This includes the Exploratorium museum by Bernard Tschumi Architects, which is distinguished by giant chimney-shaped exhibition spaces, and Shenzhen’s Longgang Cultural Centre by Mecanoo, which occupies a row of four angular red buildings.

Other projects by de Portzamparc on Dezeen include the curving concrete Cidade das Artes in Rio de Janeiro and the Dior boutique in Seoul, which he completed with Peter Marino.

Photography is by Shao Feng.