New York practice Format Architecture Office has reorganised a 1920s apartment with custom millwork in the city’s Upper West Side.

The renovated apartment by Format Architecture Office is in a Gothic Revival building on Riverside Drive, giving the project its name, Riverside Apartment. 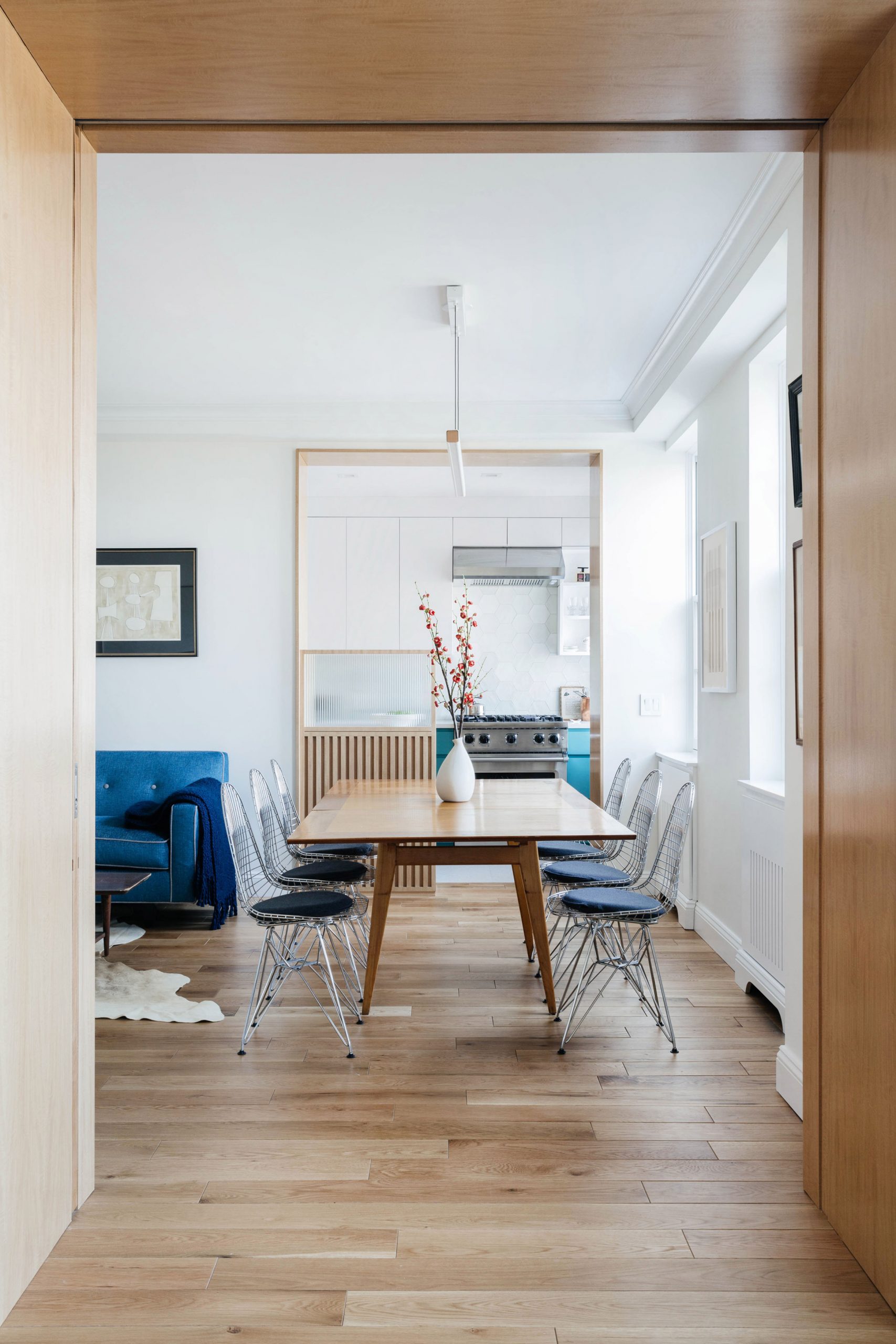 Completed before the second world war, the original apartment building had large residences that were later converted into smaller homes, which the studio said formed “a series of unconventional layouts”.

“The building was originally constructed in 1926 and arranged around opulently scaled residences with multiple bedrooms and gallery spaces,” Format Architecture Office added. 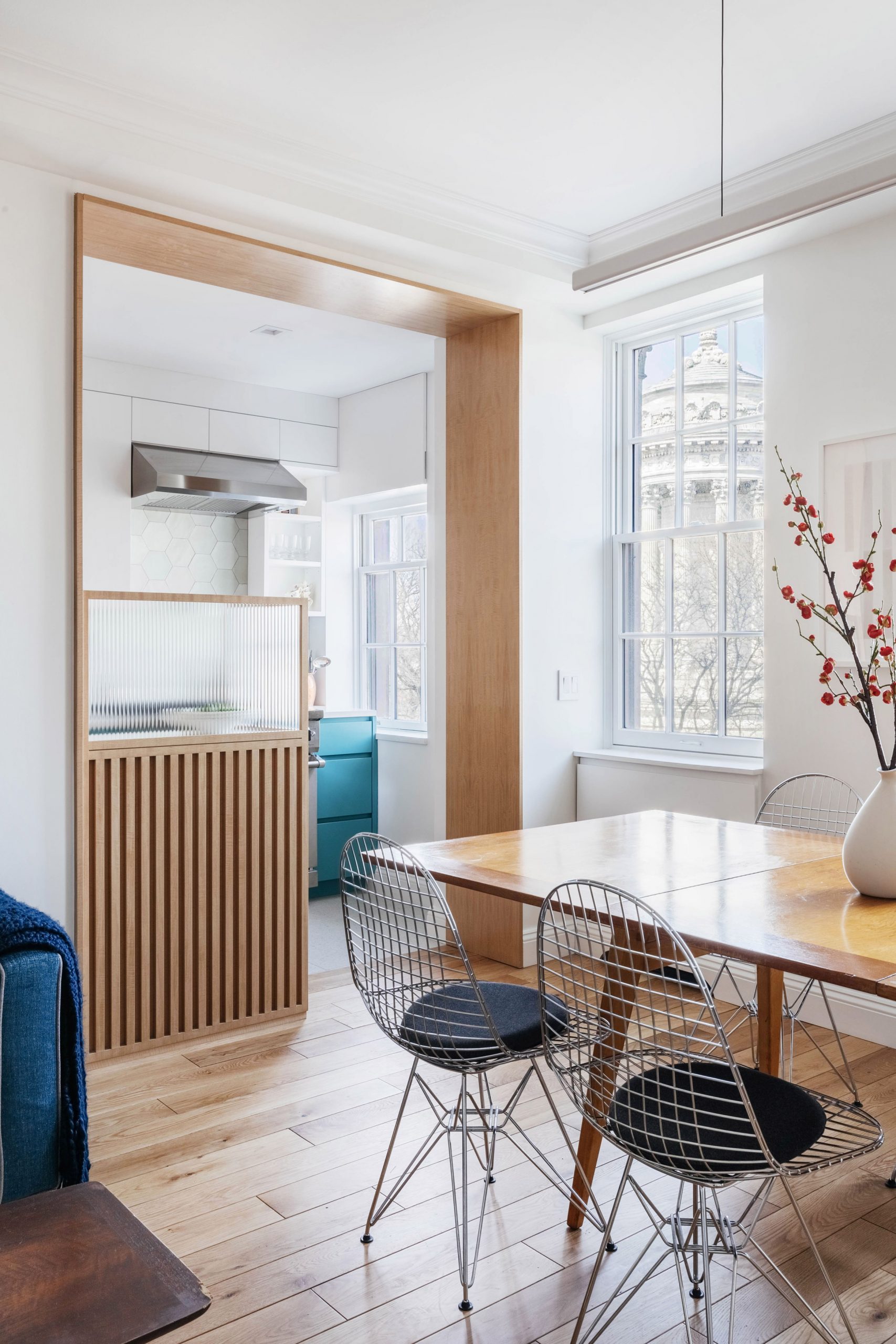 “It was converted to cooperative ownership in 1968, which created a large variety of accessible unit types, but also a series of unconventional layouts, as formerly single apartments were subdivided into two or even three different units,” it said.

The renovation reorganised the existing one-bedroom unit to include another bedroom that doubles as an office, as well as a powder room and a reorganised galley-style kitchen. The decor was updated with custom cabinets and enlarged wood-clad corridors across the 1,000-square-foot (92-square-metre) space. 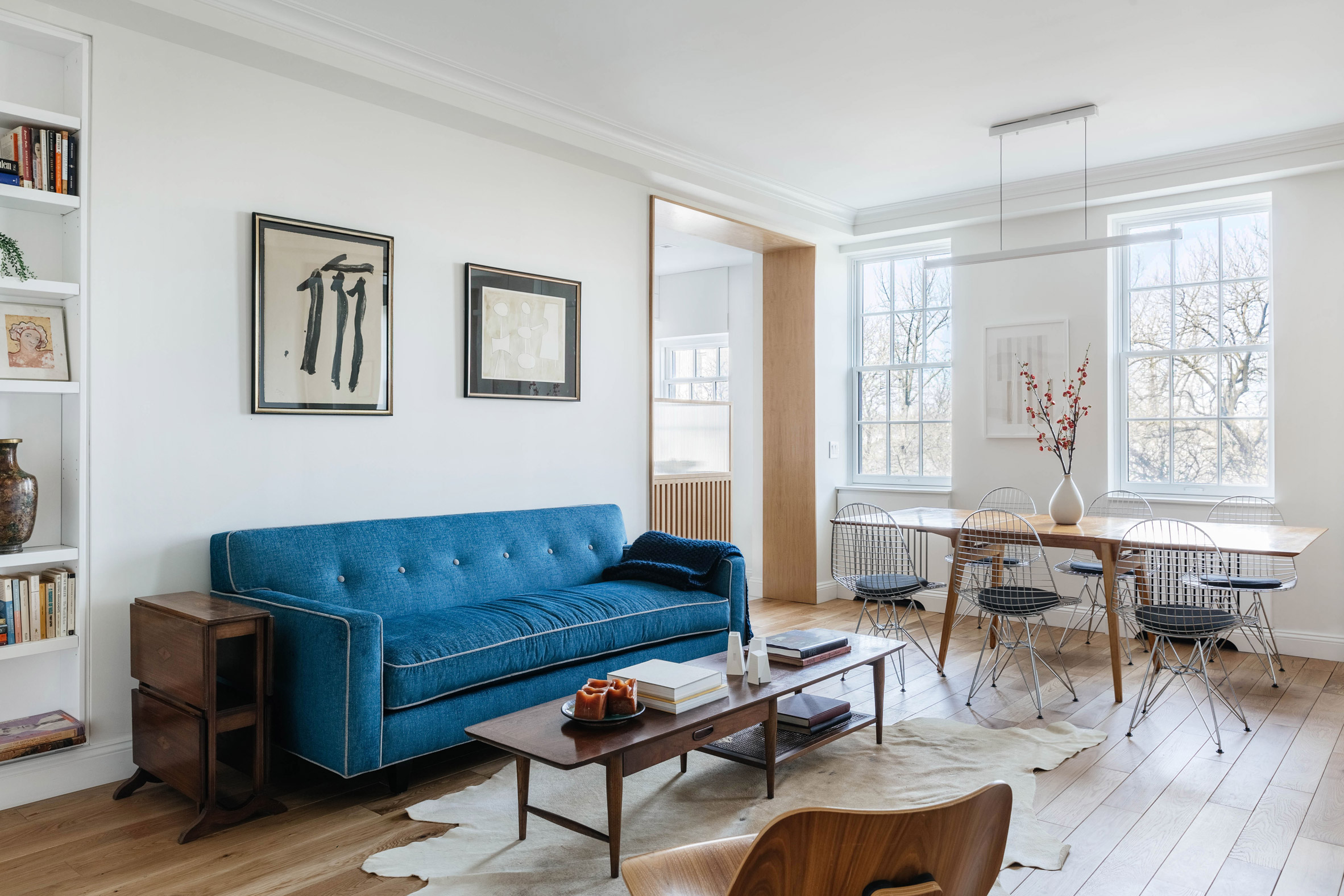 “The primary goals for the project were to create flexible connections between spaces, enhance access to natural light and maximise storage,” the studio continued.

Upon entering is a foyer with a coat closet, and a cabinet with a glass portion above that pulls natural light in from windows in a home office. A bedroom adjacent is complete with an ensuite and walk-in closet. 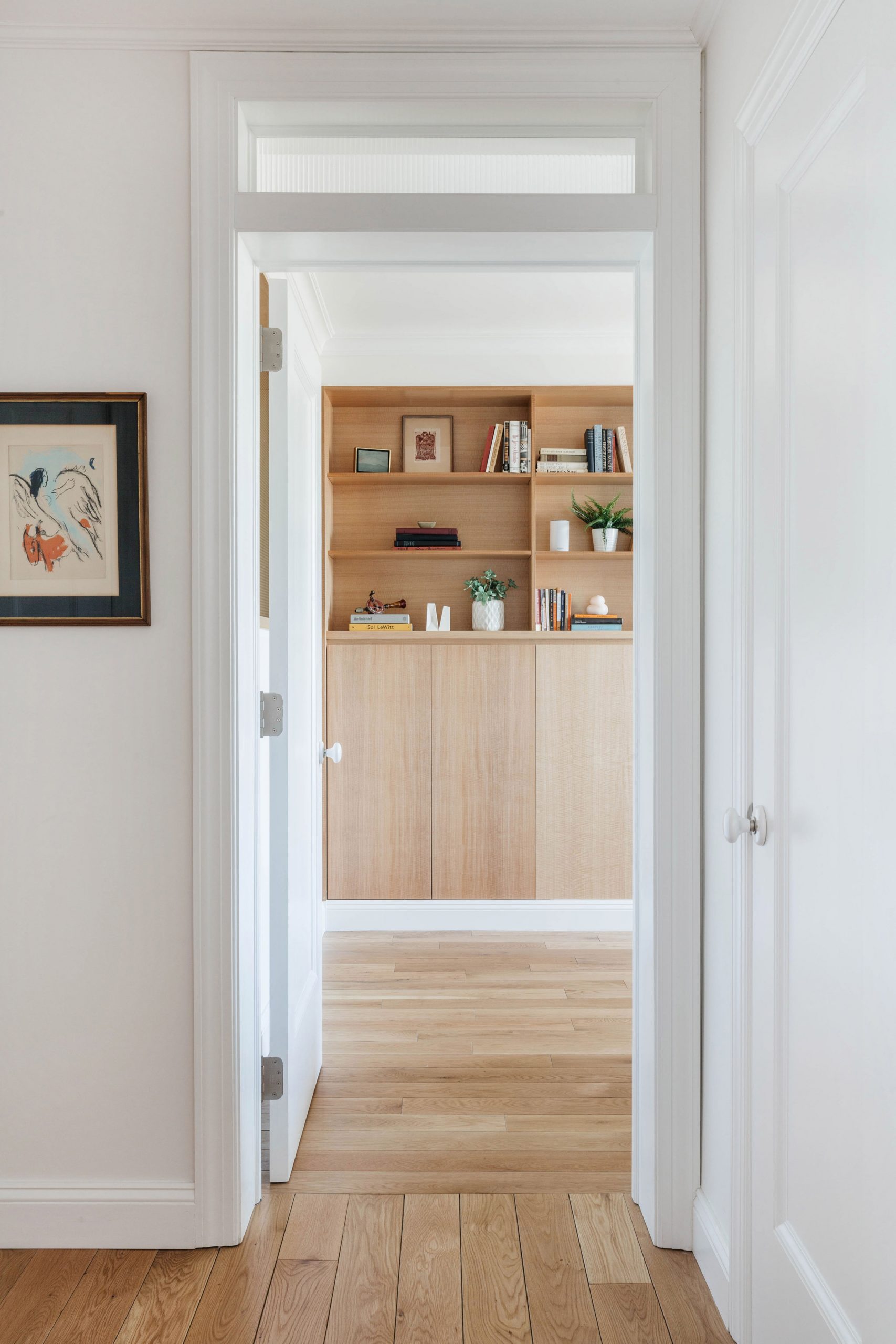 A sliding wood door separates the office from a living and dining room. The pocket door is in one of the home’s corridors, which are intended to mark different areas. 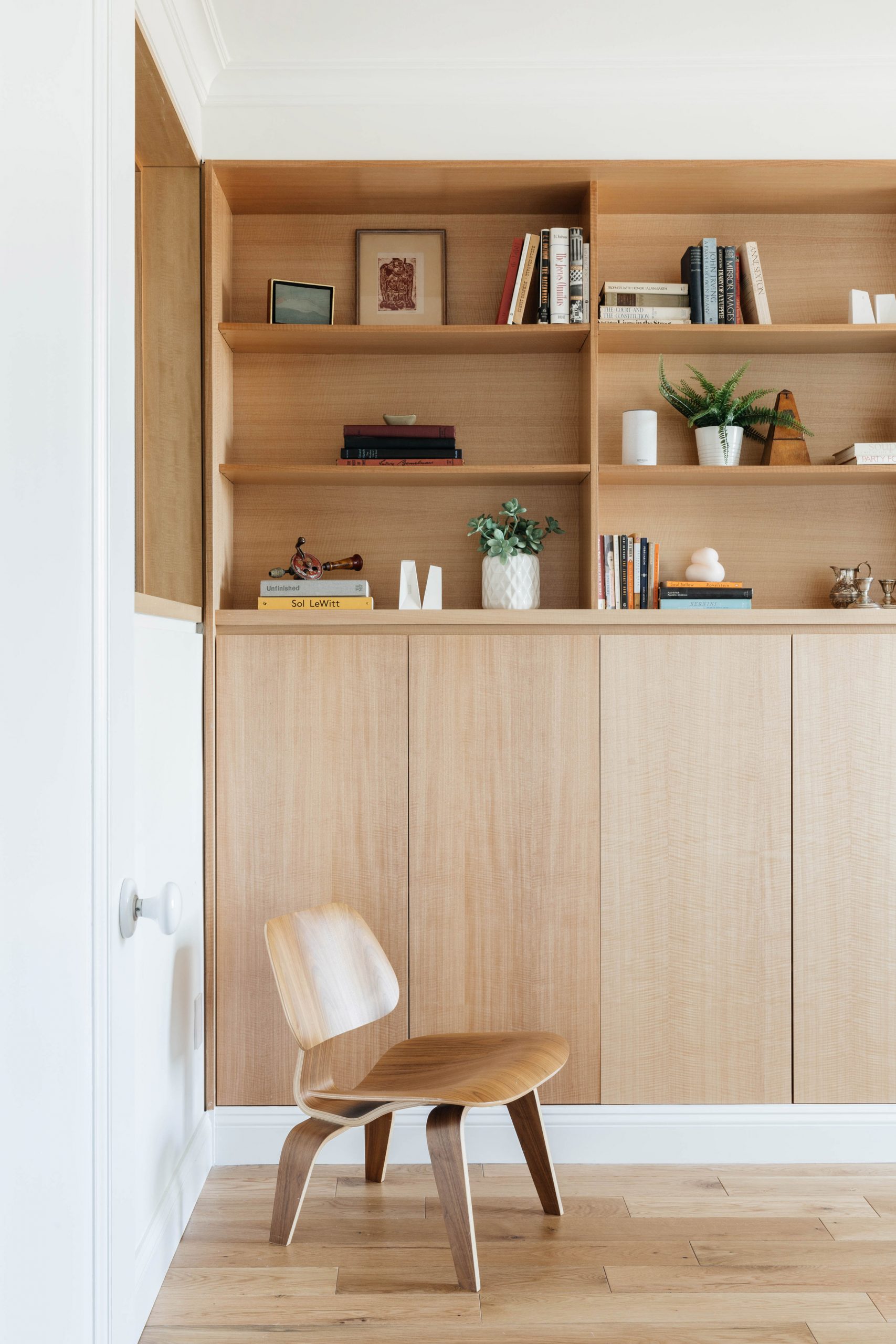 All of the millwork at Riverside Apartment, including the corridors and custom cabinets, are made from Anigre wood – an African hardwood commonly used for furniture and cabinetry.

Other corridors are in the entry and kitchen, while built-in bookshelves are prominent in the living room and office.

Contemporary details are accompanied by the apartment’s existing elements, like original wood-panelled doors with the glass transoms.

Format Architecture Office aimed to emulate the early 20th-century style through other details to create “a mixture of clean lines and pre-war inspired details to celebrate the eclectic tastes of its owner”. 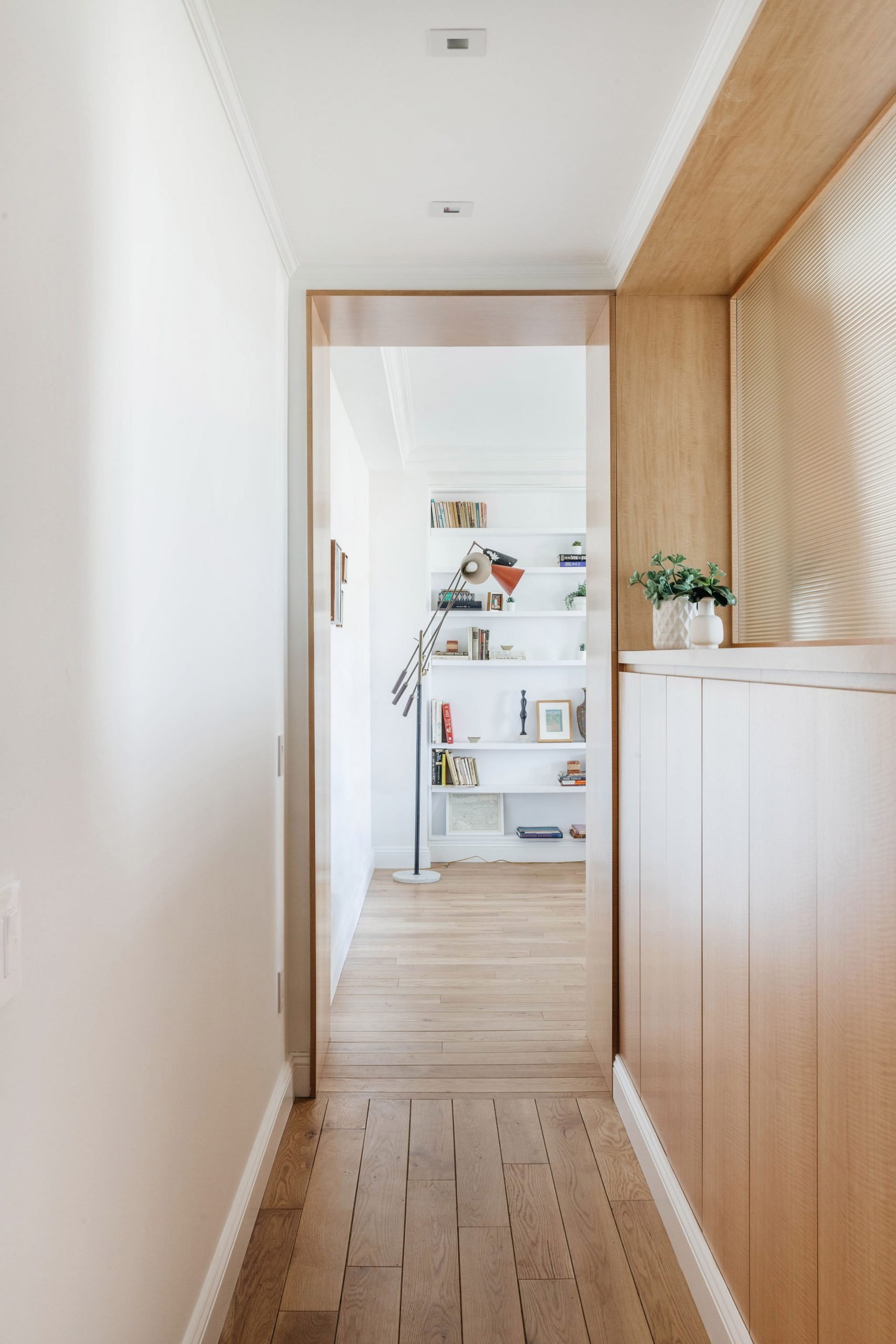 The glass wall in the entry is a reinterpretation of existing glazing, which bring light through the home. Another ribbed glass detail partially conceals the dining room from the kitchen.

A wood table, 1950s Eames Wire Chairs and a minimal white light fixture furnish the dining room, while the living room has a blue sofa and an Eames moulded plywood lounge chair from the second world war.

Off-white walls are paired with white moulding and new oak flooring for a pared-down aesthetic, while an orange-painted front door adds another pop of colour that complements teal accents. 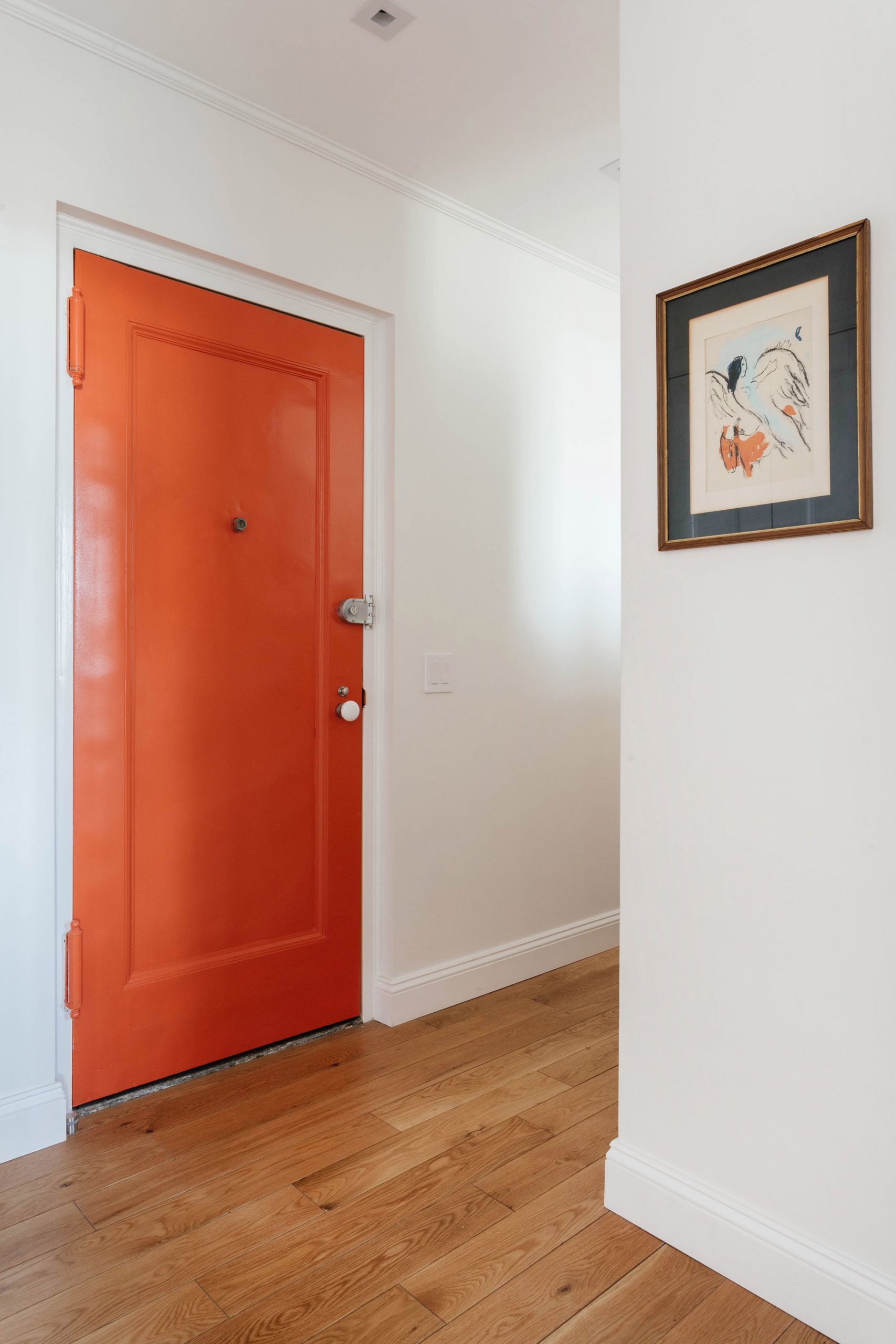 Format Architecture Office founded in 2017 by architects Andrew McGee and Matthew Hettler, who met as undergraduates at the University of Michigan. The studio is based in Brooklyn and has also designed an office for a tech company in New York’s Midtown area with cafe-style seating and muted interiors.

Other renovated homes in the Upper West Side are an apartment with a built-in bed by Stadt Architecture and a townhouse by Space4Architecture with a white spiral staircase.

Photography is by Nick Glimenakis.